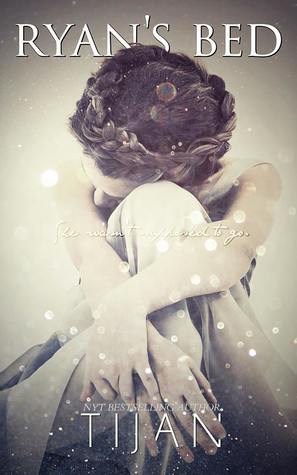 I crawled into Ryan Jensen’s bed that first night by accident.

I barely knew him. I thought it was his sister’s bed—her room. It took seconds to realize my error, and I should’ve left…

I didn’t.
I didn’t jump out.
I didn’t get embarrassed.
I relaxed.
And that night, in that moment, it was the only thing I craved.

I asked to stay. He let me, and I slept.

The truth? I never wanted to leave his bed. If I could’ve stayed forever, I would have.
He became my sanctuary.

They say every no reader ever reads the same book, we take our own life experiences, beliefs, and scars in and apply them to the story.  That sentiment is especially true for this book.  This book ripped open a part of my soul that I’d thought had healed a long time ago, the part that had been damaged when I lost my baby sister to suicide.  Tijan found that scar and poked and prodded at it in a way that was both painful and cathartic.  It’s an ache I’m sure I’ll be dealing with for some time, again.

Ryan’s Bed is a standalone novel, told in first-person perspective by Mackenzie.

I’m in awe of how real this book felt to me.  Grieving a loved one lost to suicide is a singular experience, and it was so well captured in Ryan’s Bed.  I related deeply to Mackenzie and how she slogged through her life after Willow died.  The rapid-fire emotions interspersed with periods of complete numbness were all too familiar.  It all spoke to me in a way that made me feel normal when she was feeling anything but.

I’d be remiss if I didn’t mention the titular character and his relationship with Mackenzie; it was essential to Mackenzie making it through the grieving process.  Ryan was amazing; the way he knew what Mackenzie needed and was a pillar of strength for her when she had little else to lean on.  His own experiences informed his ability to support Mackenzie in the way she most needed it.  Their dynamic, born from an intense need for understanding, was the kind of connection that binds souls together for eternity.  I loved witnessing them help one another, not only through their grief but also navigating the pitfalls of high school politics.

Tijan is an author I keep planning to read, but not taking the time for.  I have several of her books on my kindle but had not opened one until Ryan’s Bed.  If this is typical of her writing, I have been missing out on some superb writing for far too long.  I was completely wrapped up in this book, both in the story and the writing itself.  I loved her handling of such a delicate subject matter.

Tijan is a New York Times Bestselling author that writes suspenseful and unpredictable novels. Her characters are strong, intense, and gut-wrenchingly real with a little bit of sass on the side. Tijan began writing later in life and once she started, she was hooked. She’s written multi-bestsellers including the Carter Reed Series, the Fallen Crest Series, and the Broken and Screwed Series among others. She is currently writing a new YA series along with so many more from north Minnesota where she lives with a man she couldn’t be without and an English Cocker she adores.