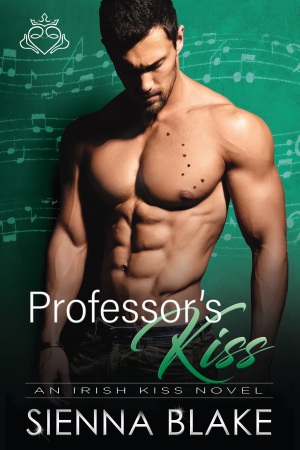 After six years I thought the pain of what he’d done to me had faded.

Because I’m standing in this crowded lecture hall of the most prestigious music school in Ireland, staring at the person who healed me when I was broken. Right before he shattered me beyond repair.

And I still feel everything.
My ex-best friend.
My first love.
My tormentor.
…is now my professor.

Professor’s Kiss was a wonderful story, it was so close to surpassing my feelings about the first book in the series, Irish Kiss, but just didn’t hit the high mark that was set by that book.  My heart broke for Danny and all the love he lacked; it also found comfort in the way Ailis (AY-lish) did her level best to show him that love and how it shouldn’t be tied to what you get out of it.

Danny was not a nice person for most of this book.  However, I never found myself hating him.  I questioned his reasoning, wondered about how could see himself the way he did, even felt sympathy toward the way he kept himself so isolated, but never saw him in the same light he did.  He was the epitome of a broken little boy who’d grown into a man who never learned how to cope with someone caring for him with no expectations.

I had a much harder time with Ailis.  I loved her, no doubt about that, but she didn’t tug on my heart in the same way Danny did.  I was constantly frustrated with what she put up with from Danny and how often she flip-flopped on her conviction not to let Danny continue to use and abuse her.  While I understood how much damage Danny had done to her psyche over the years, her refusal to believe that she was worthy of anything was beyond maddening.

Professor’s Kiss was a slow-burn angstfest.  While the plot, in both the present and the past, was constantly moving forward and propelling Ailis and Danny to address all the things that had transpired between them.  Theirs was not a particularly happy story; there were countless traumas they’d suffered at each other’s hand and by outside forces.  The connection between Ailis and Danny was undeniable, though; their dynamic was electric, and the care and concern they had for one another bled from the pages – even when they were trying to deny and suppress it.

I wish the end of this story would have matched the intensity of the first 90% or so of it.  Professor’s Kiss had such an amazing build-up, and I was prepared for an epic ending to their story, but it just fell a little flat for me.  If a little more of Danny’s healing had been captured in the book or there were a few more chapters of them being happily and fully committed to one another this book could have been stellar.  I was so disappointed that the book fell apart, for me, in those last few moments.

Professor’s Kiss is the second book in Sienna Blake’s Irish Kiss series.  These books are standalones, with some interconnected characters and overlapping timelines.  These books do not have to be read in order, and there is nothing lost in reading one book without reading the others.  Professor’s Kiss is written in dual first-person perspective, narrated by Ailis and Danny.

Sienna Blake is a phenomenal author.  This book may not have hit all the right notes for me in the end, but it still delivered a fabulous story and was quite compelling.  Ms. Blake is a skilled wordsmith.  Her writing conveys a deep sense of emotion, and her style lends well to the deep, poignant stories she writes. 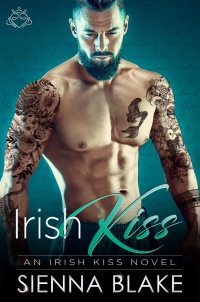 I wanted him since the day I met him. Long haired, tattooed and tall as an Irish giant. He was more than just handsome, he was drop dead gorgeous. And the only one who ever truly cared. It didn’t matter to him that my father was a criminal and my mother a whore. He saw me, understood me.

I could be anything I wanted, he said.
Except his.
Because I was too young and he was my Juvenile Liaison Officer.

It’s been years since I last saw her. No longer a girl, she has a body of a woman. When our eyes met again, I saw the only one who ever broke through my asshole mask. She never judged me. She saw me, accepted me.

She could be anything she wanted.
Except mine.
Cause she’s only seventeen and I’m trying my hardest not to fall for her.

If I give in, she will ruin me.

*This is a slow-burn, angsty love story spanning across a seven-year time period with sexual situations and drug-use involving characters under the age of eighteen.
Irish Kiss is a complete standalone novel with a Happily Ever After, but damn, it is going to hurt along the way.*

Sienna Blake is a storyteller & ink slinger, word spinner of love stories with grit, and alter ego of a USA Today Bestselling Author.

She loves all things that make her heart race — roller coasters, thrillers and rowdy unrestrained sex. She likes to explore the darker side of human nature in her writing.

If she told you who she really was, she’d have to kill you. Because of her passion for crime and forensics, she’d totally get away with your murder.

Sign up for my newsletter and get Paper Dolls, a full-length romantic suspense as a thank you gift. You’ll also be the first to hear about new releases, sales and giveaways ► www.subscribepage.com/SiennaBlake