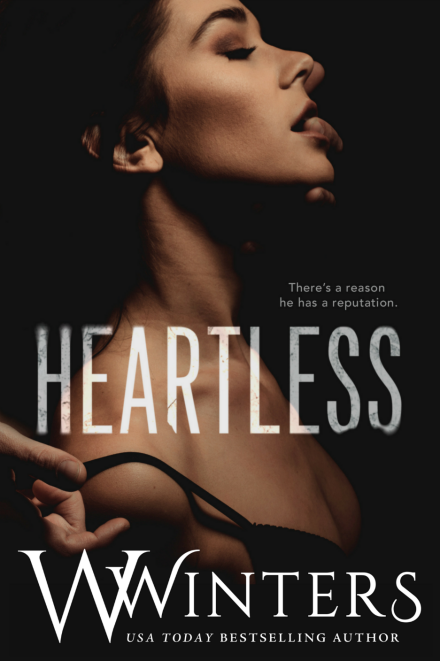 At first, his words were harsh and his touch cold.
I knew he was a dangerous man and he could destroy me if only he wanted to.

That’s not what he wanted though.
It’s so easy to get lost in the touch of a man who’s powerful and unattainable.
A man who wants for nothing … except me.
Soft touches and stolen glances made my blood heat and my heart beat in a way I never knew it could.

Yes, it’s easy to fall into a haze of lust and desire.
But there’s a reason his reputation is one of a heartless man.
And I should have known better.

A ruthless man with a past to hide doesn’t let a soul close to him.
A coldhearted man at war doesn’t risk anything for anyone.
A depraved man with a beautiful woman at his mercy … he doesn’t fall for her.

She was only a bargaining chip.  Now she’s my property.
I own her.
Nothing has thrilled me more than the thought of taking her how I’ve always wanted to.
To break her and make that soft voice of hers whimper with a strangled moan as I ravage her.

I know better than to give in to temptation and let her distract me from everything that’s at stake.

No matter how badly I crave more of her.
No matter how much the sordid thoughts plague me.
No matter if it’s the one thing that I’ve always wanted more than anything else.

Willow Winters is so happy to be a USA Today, Wall Street Journal and #1 Contemporary Bestselling Romance Author. She likes her action hot and her bad boys hotter. She certainly doesn’t hold back on either one in her writing!

Willow started writing after having her little girl, Evie, December 2015. All during her pregnancy with Evie she continued to read and she only wanted to read romance. She was reading a book a day — sometimes two.

In January 2016 Willow was staying up late with Evie and just thinking of all these stories. They came to her constantly so she finally sat down and just started writing. She always wanted to do it so she figured, why not? Today Willow cannot be happier for making that decision!