A Riscoff and a Gable can never live happily ever after. Our family feud is the stuff of legends.

Ten years ago, Whitney Gable caught me off guard with her long legs and grab-you-by-the-balls blue eyes.

I didn’t know or care what her name was.

Like any Riscoff worth the family name, I went after what I wanted. We burned like a flash fire until she married another man.

She hates me, and she should.

I objected on her wedding day.

Now she’s home, with those same long legs and man-eater stare, but there’s no ring on her finger.

They say a Riscoff and a Gable can never live happily ever after . . . but I’m not done with Whitney Gable.

I’ll never be done with her.

While I am no expert on Meghan March’s repertoire, this book is so different than the other books I’ve read by her.  The suspense and intrigue, while still present, wasn’t as paramount in Richer than Sin. Instead, it focused on the microcosm of small-town dynamics and familial relationships.  It was fascinating, and I can’t wait to see what is bubbling beneath the surface because I am sure we’ve only just scratched the surface on what’s going on in Gable.

There are few tropes I enjoy more than second-chance romances and forbidden romance is one of those.  Combine those two, and I’m all in.  While Richer than Sin could easily be compared to Romeo and Juliet, I feel like that comparison doesn’t do the story justice – it diminishes the extent of Whitney and Lincoln’s relationship.  No, this book is more Hatfields and McCoys meets the Notebook.  The animosity between the families was so intense and long-lived, it was almost more about carrying on tradition than it was about the actual feud.  And Whitney and Lincoln’s relationship transcended the infatuation of two teenagers and bordered on something essential to their survival.

I can’t talk about this book and not mention perhaps the most important character in this book, the town of Gable itself.  So much of what Whitney and Lincoln went through was because of the tense dynamics of living in a town where one family rules above all others.  I loved how Ms. March used that quality to push the story forward and put the characters in situations that demanded more from them than they deserved.

While Richer than Sin didn’t have the same type of suspense as her other novels, it was no less intriguing.  There are so many moving parts within the Riscoff and Gable families; it feels as if there will be no end to the things we uncover about them and their dubious connections.  I have so many theories and speculations about what is going on with them, and I have no doubt my assumptions barely scratch the surface of what is boiling underneath their feud.

Meghan March continues to impress me with her engrossing storylines.  Each time I open one of her books I’m swept up in these rich worlds with endless secrets and fascinating relationships.  I appreciate how, while all of her books have a similar style, each one has a freshness and theme all its own.  Her characters all have an innate strength, and I love that her heroines are never shrinking violets.  Every time I read one of her series I’m caught up in all of it, but I think the Sin series is going to be at the top of my list of my favorites from her.

Guilty until proven innocent.
That’s the way the world works, right?
I’m tired of being convicted without evidence, all because my last name is Gable.
The Riscoffs might own this town, but I’m done following their rules.
If only I could forget just how easily Lincoln Riscoff can drag me under his spell.

Whitney Gable is the kind of woman you fight to the death to protect.
To keep.
To cherish.
I’ve finally learned my lesson, and it’s time to prove I’m the man who’s worthy of her.
I don’t care what it takes, because failure is not an option.
No matter who or what stands in our way—this time, she’ll be mine forever 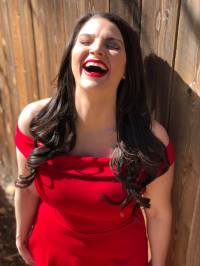 A New York Times, #1 Wall Street Journal, and USA Today bestselling author of over twenty novels, Meghan March has been known to wear camo face paint and tromp around in woods wearing mud-covered boots, all while sporting a perfect manicure. She’s also impulsive, easily entertained, and absolutely unapologetic about the fact that she loves to read and write smut. Her past lives include slinging auto parts, selling lingerie, making custom jewelry, and practicing corporate law. Writing books about dirty talking alpha males and the strong, sassy women who bring them to their knees is by far the most fabulous job she’s ever had.