My name is Ashley Ellis…

I was thirteen years old when my mother – retired supermodel, Tig – married Mosier Răumann, who was twice her age and the head of the Răumann crime family.

When I turned eighteen, my mother mysteriously died. Only then did I discover the dark plans my stepfather had in store for me all along; the debauched “work” he expected me to do.

With the help of my godfather, Gus, I have escaped from Mosier’s clutches, but his twin sons and henchmen have been tasked with hunting me down. And they will stop at nothing to return my virgin body to their father

** Contemporary Romance. Due to profanity and very strong sexual content, this book is not intended for readers under the age of 18.**

Fragments of Ash is part of the ~a modern fairytale~ collection: contemporary, standalone romances inspired by beloved fairy tales.

Fragments of Ash may have just replaced The Vixen and the Vet as my favorite of Katy Regnery’s Modern Fairytales.  It was superb and emotional, sweet and a little sultry, with dark themes and beautiful characters.  While Cinderella has never been my favorite fairytale, this is my favorite retelling of any fairytale, ever.

Ashley’s life made the Cinderella we all know and love seem like she was living the dream.  Ashley had spent the entirety of her life experiencing the worst parts of humanity, yet still seemed to see and hope for the best in people.  She was so pure and kind; it was painful as we slowly understood the type of life she’d been exposed to.  Her strength was quiet, but it was fierce, and I admired how well she carried the burden she’d been forced to bear.

At first, I wasn’t sure about the idea of an evil stepfather, but I was quickly proved wrong when I realized how much more terrifying that change could be.  I loved how intense and horrific Ms. Regnery made Ashley’s situation.  It was gut-wrenching and heartbreaking in one fell swoop.  One of my very favorite aspects of Fragments of Ash was the way Ashley connected with her mother, it was unique and compelling, and really let both Ashley and me, as a reader, understand the struggles of a woman who otherwise seemed completely disconnected and unforgivable.

Fragments of Ash is the seventh book in Katy Regnery’s Modern Fairytale series.  These books are all complete standalones, the only thread connecting them is that they are retellings of classic fairytales.  Fragments of Ash is written in dual first-person perspective, narrated by Ashley and Julian.

Katy Regnery is a versatile author, and I have loved every type of story I’ve read by her.  She knows how to make her readers connect with her characters and care for them.   Her plots always feel fresh and interesting, and she knows how to keep her storylines well-paced and compelling.  I always look forward to her new releases and know I will be a longtime reader of her work.

Sitting in an old, broken-in wicker chair that looks out at the barn and meadow, I place my food on the table beside me and bow my head in prayer.
“Bless us, O Lord, and these Thy gifts, which we are about to receive from Thy bounty, through Christ our Lord. Amen.”
When I look up, I see the barn door slam shut and find Bruno standing across the gravel driveway, watching me. He makes a baying sound, then crosses toward me, the pitter-patter of his paws on the gravel making me grin.
“Good morning, sweet boy,” I say, as he approaches. “Are you coming to visit me?”
He pads up the three back porch stairs to my chair, sits at my bare feet, and looks up at me expectantly.
“Are you hungry, baby?”
As if he can understand my words, he darts a glance to my eggs and licks his lips.
“I’m not sure I’m allowed to feed you,” I tell him.
“Rowr. Rowr,” he rumbles, looking at my eggs again.
“Hm. Okay. How about I have one and you have one?”
I lower my plate and slide one egg off the side and onto the porch floor. Before it hits the ground, it’s gone.
“Whoa!”
He looks surprised, then sits down genteelly, staring up at me like I’ve hung the moon. I giggle at his hopeful expression.
“More? Doesn’t your master feed you?”
I pick up my fork and try to avoid his eyes as I cut a small piece of egg then spear it with the tines. But I can’t avoid the small movements of his head, which track my every movement.
“Still hungry?”
He whines hopefully, his amber tail swinging back and forth on the porch floor like a duster.
“Oh, fine!” I say, placing the plate on the floor with another giggle. “You win.”
He leans down, gobbling up my second egg, and I make a mental note to change my grocery order from one dozen eggs to two.
“He’s taking advantage of you.”
Julian is standing halfway between the barn and the house, hands on his hips and a difficult-to-read expression on his face. Annoyed? Amused? Hmm. I’m not sure.
“Did you let him eat your whole breakfast?” he asks.
“Wh-what? No! We just . . . I was just sharing . . .”
“. . . your whole breakfast,” he finishes for me matter-of-factly.
He whistles—a short, high-pitched sound—and Bruno immediately trots down the porch steps and sits down in the gravel next to his owner.
“I’m . . . I’m sorry,” I say, reaching for my orange like I’m trying to even the score. You have a dog? Well, look at me, buster. I have an orange. “I should have asked your permission before feeding him.”
“Probably,” he says, reaching down to ruffle Bruno’s head. “But it’s okay. He’s a hound. It’s not like he’s going to get sick. Hounds aren’t prissy.”
“Are some dogs . . . prissy?” I ask, clasping my orange between both hands. This is the longest I’ve spoken to a single, young, available man, on my own, since I was thirteen, and I can almost feel the fourteen-, fifteen-, sixteen-, and seventeen-year-old parts of me jumping up and down and swooning inside.
“Ever meet a poodle? Or a Chihuahua?”
My shoulders skim my ears when I shrug. “I don’t really know that much about dogs.”
“Never had one?”
“No.”
“Okay. Well, Bruno’s a hound. Specifically, he’s a redbone coonhound. He’s a working dog. A hunter.”
“He hunts . . . raccoons?”
“His breed does.”
“Oh.” I think this over. “Poor raccoons.”
And then the most miraculous thing happens. Miraculous because I wasn’t expecting it. Miraculous because I thought Julian was beautiful when I first saw him yesterday, but I had no idea how he could look . . . when he smiled.
I’m not ready for it. None of me is ready for the lightning bolt of pleasure that enters through my eyes and zaps my whole body, down to the tips of my toes and back up again. I feel lit up from the inside. Hot and bright.
“Poor raccoons.” He chuckles softly, like he’s surprised, then shakes his head, staring down at Bruno. “Yeah. Okay.” He looks up and meets my eyes, his own still slightly crinkled from his smile. “Don’t worry. I let him tree them, not kill them.”
I realize that my mouth’s hanging open, and I close it, passing my orange from hand to hand as my racing heart pounds in my ears.
His smile fades as he stares back at me, the silence taut between us. His eyes widen, darkening to a deep forest green, and I watch, mesmerized, as he licks his lips before glancing over his shoulder at the barn.
“I should . . . get back to work.”
“Me too,” I murmur.
“You too?” he asks, his brows furrowing in confusion.
“No. Not me,” I say, popping up from my chair, my face flaming as my fingernails dig into the skin of the orange, spraying bitter juice onto my fingers. “I’m not . . . working. I’m just . . . I . . . I have to go, um, too.”
He stares at me for an extra beat, then chuckles softly before heading back to the barn.
I stare at his back, lowering my eyes to his waist, then still lower to his—
“Hey, Ashley,” he says, turning so fast, he catches me staring at his backside.
Can you clock the speed at which a human neck snaps up? Whatever the record used to be, I’m positive I just beat it. “Hmm? Y-yes?”
He grins at me, and I know I’ve been caught gaping. Lord, help me. I brace myself, expecting him to say something lewd or, at the very least, suggestive. Heck, I haven’t been called a bitch in almost thirty-six hours. I suppose I’m long past due.
“Thanks for dinner,” he says softly, then turns back around and saunters into the barn. 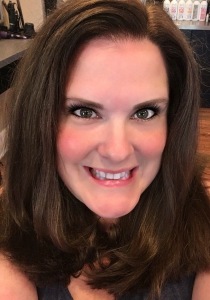 New York Times and USA Today bestselling author Katy Regnery started her writing career by enrolling in a short story class in January 2012. One year later, she signed her first contract, and Katy’s first novel was published in September 2013.

Katy’s first modern fairytale romance, The Vixen and the Vet, was nominated for a RITA® in 2015 and won the 2015 Kindle Book Award for romance. Katy’s boxed set, The English Brothers Boxed Set, Books #1–4, hit the USA Today bestseller list in 2015, and her Christmas story, Marrying Mr. English, appeared on the list a week later. In May 2016, Katy’s Blueberry Lane collection, The Winslow Brothers Boxed Set, Books #1–4, became a New York Times e-book bestseller.

Katy lives in the relative wilds of northern Fairfield County, Connecticut, where her writing room looks out at the woods, and her husband, two young children, two dogs, and one Blue Tonkinese kitten create just enough cheerful chaos to remind her that the very best love stories begin at home.