I broke her heart ten years ago and left town.

She hates me, and rightly so. It doesn’t matter that the rest of the country loves me, that I’m a starting quarterback with a multimillion-dollar contract. Because when I look in the mirror, all I see is a failure who was too young—and too afraid—to fight for what I wanted.

But I’m not that guy anymore, and all I need is one shot to convince her.

He has no idea what happened after he left. And now I’m supposed to work alongside him like we don’t have this huge, messy history?

But I’m older now, wiser, and I won’t let anything stand in my way of doing a good job for this league. Not even one overpaid, arrogant player who thinks we’re going to kiss and make up.

News flash, buddy: I am over you.

Dear Jane was a sweet, swoony, story; great for a lazy afternoon read.  I had such a fun time getting to know Jane and Weston, along with his teammates.  I live for second chance romances, and Dear Jane catered to my guilty pleasure in a fun, delightful way.

I loved how feisty Jane was.  She knew what her worth was and wasn’t going to settle for anything less than she deserved.  The fact that she didn’t just crumble at Weston’s feet when she realized there was still something between them was amazing.  My heart broke for what she had been through, but I was impressed with her strength to overcome it and forgive Weston for the sins of their shared history.

For me, too often second-chance romances leave out a vital part of the story: the forgiveness and understanding of what went wrong in the past.  Either it comes so late in the recoupling it feels unimportant, or it’s barely glossed over and forgotten.  I was happy to see Jane and Weston confront their parts in what had happened, and it felt like they came to a place of true reconciliation regarding their past.

Dear Jane is a standalone novel, though there have been mentions of Weston in other books he hasn’t played a major part in any of them.  Also, there will be a spinoff of Dear Jane, Finding Alexei which will also be a standalone, but we meet Alexei in this novel.  Dear Jane is written in dual first-person perspective, narrated by Jane and Weston. 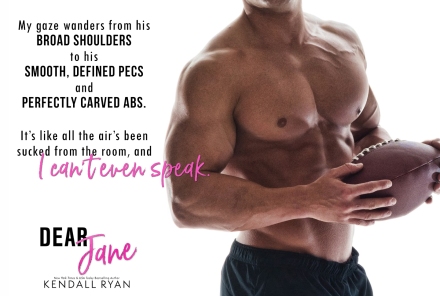 A New York Times, Wall Street Journal, and USA Today bestselling author of more than two dozen titles, Kendall Ryan has sold over 1.5 million books and her books have been translated into several languages in countries around the world. She’s a traditionally published author with Simon & Schuster and Harper Collins UK, as well as an independently published author. Since she first began self-publishing in 2012, she’s appeared at #1 on Barnes & Noble and iBooks charts around the world. Her books have also appeared on the New York Times and USA Today bestseller lists more than three dozen times. Ryan has been featured in such publications as USA Today, Newsweek, and InTouch Magazine.

Visit her at:  for the latest book news, and fun extras