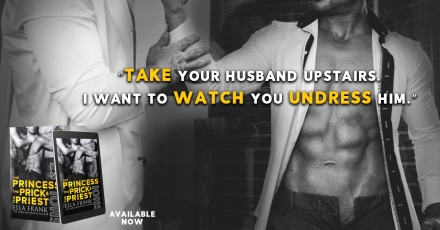 Confessions: The Princess, The Prick, and The Priest, a fun, flirty story in the Confessions Series from USA Today bestselling author Ella Frank is LIVE!

Everyone said our love wouldn’t work.

That it was too hard, too complicated, too messy.

Oh how I enjoy proving everyone wrong.

My men are smart, sexy, sophisticated—

and most of all, crazy about me.

The only problem is trying to explain

that to my big, opinionated Italian family.

But after all we’ve been through, we deserve a

happily ever after. And if there’s one

thing I know about my guys, they always

manage to have a few surprises up their sleeves.

Download your copy today or read FREE in Kindle Unlimited!

Confessions: the Princess, the Prick, & the Priest is drama free, angst-free, and really just a wonderful way to wrap up a series that was so hard on the people living it. Robbie, Julien, and Priest had already been through so much, overcome so many things, healed so completely, it was good to see them finally living out from under the clouds they’d been covered by for so long.

I loved Robbie’s family and how accepting they were of his less than conventional relationship. It was also so heartwarming to see how completely and lovingly they brought Julien and Priest into the fold. They both needed that kind of unconditional love and acceptance; I’m sure finally having that kind of unfettered welcome helped to heal the final broken pieces in both men.

I’m not sure why everyone dreads their thirties.
As far as I’m concerned, it’s going to be
the best decade ever ~ Robbie

“LOVERS, I’M HOME,” Robbie Bianchi called out to his boyfriends, as he juggled several shopping bags in one hand and kicked the front door shut behind him. He stuffed his car keys into the pocket of his shorts, and as he evened out what he was carrying, he took the stairs that led him up to the first floor of their new home.

With the same smile on his face that he’d left with that morning, Robbie headed across the hardwood floors past the dining room, and into the kitchen, where he spotted a note waiting for him: We’re upstairs, princesse. Come find us when you get home.

Robbie grinned at the messy crown drawn above the i in princesse, but then quickly did as he was told. With one hand on the steel rail, he took the stairs two at a time, and as he reached the second floor where the bedroom was located, he walked inside to find it empty except for the fish swimming around the tank that lined the wall facing their bed.

Dropping his shopping bags on the end of the mattress, Robbie headed up to the final floor, where he knew his men were waiting for him. He opened up the glass door that led to the penthouse deck, and when he stepped outside and the warm rays washed over him, Robbie took in a breath of fresh air.

Ah, he’d always loved summer. Everything about it. The sun, the smell of the freshly cut grass, and the clothes—or lack thereof—Robbie thought, as he reached for the edge of his white tank top and drew it over his head.

As he tucked it into the back of his shorts, Robbie scanned the wide deck, his eyes roaming over the wooden slat floor, the hot tub over in the corner, and the glistening water of the lap pool surrounded by the potted greenery bordering their rooftop oasis.

This space had been the final selling point with all three of them when they’d made the decision to leave the condo after what had happened there with Jimmy. It was the perfect place for Julien to relax and do his yoga, for Priest, who loved a good soak to clear his mind, and for Robbie, for whom it was all about the calm he got from finally seeing his men happy and at peace. And that was exactly how he found one of them right now. There, stretched out on one of the sun loungers, was the brand-new reason that Robbie loved summer—an almost-naked Julien Thornton.

Dressed in tight, black, barely there swim shorts that left little—okay, nothing—to the imagination, the only other thing Julien was wearing was a pair of Aviator sunglasses. His rich, olive-colored skin was glistening with water droplets as he lay sprawled out with his hands behind his head, and oh my God was he a feast for the eyes.

As Robbie walked to the end of the lounger, his eyes roamed up Julien’s toned legs to his muscular thighs, and ended at the bulge that tight material was cupping like a glove.

Oh yes, this was hands down the best part about summer now, and luckily for Robbie and Priest, tanning was a favorite pastime of their seriously sexy Frenchman.

“Bonjour, princesse.” Julien’s honey-toned voice wrapped around Robbie, informing him that he’d been caught staring. But he didn’t care—not one little bit.

“One second, please. I’m concentrating here,”Robbie said, his gaze trailing up all he could see to finally land on Julien’s face. “Now, sorry, what were you saying?”

Julien chuckled as Robbie walked alongside him. “Bonjour, princesse.”

“Oh, yes,” Robbie said, and bent down to brush a kiss across Julien’s lips. “Bonjour, Jules.”

Robbie went to straighten, but before he got too far away, Julien took hold of the back of his neck and craned up for a deeper kiss. Robbie’s lips parted, and Julien slipped his tongue inside, making Robbie’s cock jerk to attention, as he braced his hand on the back of the lounger and sank into the deliciousness that was all Julien.

Relationships are complex.
Love ever-changing.
And when it comes to rules of the heart,
they were made to be broken…

That’s what Robert Antonio Bianchi was telling himself, anyway.
Otherwise, he really had no excuse for what—or who—he’d done.

No excuse, except for his lonely heart, a pitcher of margaritas, four Bitter Bitches, and the apparent need to confess all his weaknesses to the two men he knew would bring him nothing but trouble.

But trouble was nothing new.
Just ask his crazy sisters or any of his friends, and they’d be the first to tell you:
If there was a bad decision to be made, Robbie always had a knack for making it.

And thus begins the story of the priest, the princess, and the prick. 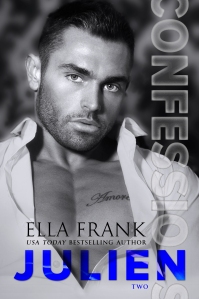 People are complex.
Love a double-edged sword.
And when it comes to a broken heart, there are no rules, only time…

For the past eight years, Julien Thornton has been living with a secret. One that only a handful of people know about.

To the outside world, he has it all.
A thriving career. A loving husband. And a face that the American public fell for by the millions, on a reality show that inadvertently saved his life.

But behind the shine of celebrity, behind the easygoing nature, a crippling truth fills Julien with pain and self-loathing. It’s a truth that he fights to overcome daily with the help of his husband, Joel Priestley, and now their boyfriend, Robbie Bianchi.

But unlike Priest, Robbie doesn’t know what he’s helping Julien to fight. He doesn’t know what Julien did all those years ago. And with the anniversary of his sister’s death fast approaching, the time for explanations is running out.

And thus the question: will the princess be able to forgive the prick as the priest once did?

Only time will tell. 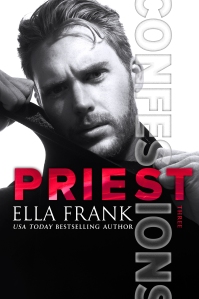 My love is all-encompassing.
And when it comes to my heart, there is only one rule:
Don’t mess with what’s mine.

Until the age of seven, I was Joel Alexander Donovan, son of Jimmy.
The man who terrorized a town and made its citizens fear
the very ground he walked on. Including me,
the day I realized that ground ran red with blood.

At age eighteen, I became Priest.
A man without a past.
A man determined to right the wrongs of my father.
A man who never believed anyone could love the son of such a monster.

But then a thief stole my heart.
A sweetheart lit up my world.
And I forgot for a moment you should never turn your back on your enemy.

And thus begins a lesson to those who would seek to harm: Never underestimate what the Priest will do to protect the Princess and the Prick.

Ella Frank is the USA Today Bestselling author of the Temptation series, including Try, Take, and Trust and is the co-author of the fan-favorite contemporary romance, Sex Addict. Her Exquisite series has been praised as “scorching hot!” and “enticingly sexy!”